When it's time to step up your game.

When it comes to tennis, you may think that you know almost everything there is to know. Perhaps you have played tennis since you were a child, maybe you’ve recently signed up for tennis lessons, or it might be that your child attends a tennis academy. Whatever the reason, we are almost positive that there are at least 10 things that you didn’t know about tennis. Continue reading today’s post to test your knowledge of tennis and call Gorin Tennis Academy in Granite Bay to learn about the different tennis lessons and camps that we offer.

1. Tennis was popularized by a king.

King Louis X of France reigned in the 14th century, and is the first known tennis player. At the time, tennis was actually played with bare hands, and the king was such a fanatic for this early version of tennis that he actually became the first person to construct indoor courts.

2. Tennis was once banned because of its popularity.

Tennis was wild in its early history, and apparently, so many people were hooked that various religious and political leaders were concerned about how much time was being spent on indoor courts. In France, for example, it became so popular among clerics that archbishops were known to forbid priests from playing tennis! The game of tennis was actually outlawed in England in 1388 because people were being distracted from the more serious, and socially acceptable, task of practicing their archery skills. Paris followed suit in 1397 and banned tennis so that citizens would stop neglecting their jobs.

Tennis today looks almost nothing like the game that took Europe by storm. The game, which evolved from jeu de paume, is still played today and is referred to as “real tennis” by its aficionados. It is played indoors, is much more complex, and appears to be a cross between tennis and squash.

Modern tennis, as we’ve mentioned, evolved from real tennis. Major Walter Clopton Wingfield is the man we have to thank for the modern embodiment of tennis, however, we should also be thankful that his name for this game didn’t stick — “Sphairistike.” The name didn’t stick, and the game simply became known as lawn tennis.

5. The very first Wimbledon was held to raise cash.

Wimbledon did not begin as the glamorous tennis tournament that it is today. In fact, it was originally put on in 1877 to raise money to repair a roller for the lawns at the All England Club. The winner, Spencer Gore, didn’t think much of the sport and said that it would never rank among the great games.

6. There are only eight basic shots in tennis.

A good tennis player should have these eight shots within his or her repertoire: serve, backhand, forehand, volley, half-volley, overhead smash, drop shot, and lob.

7. Arthur Ashe was the first African American to win the U.S. Open in 1968

Arthur Ashe broke numerous racial roadblocks to become the first African-American man to win the U.S. Open in 1968, the Australian Open in 1970, and Wimbledon in 1975.

8. Tennis is played on more than just clay and grass.

There are actually four different types of court surfaces that are used in professional tennis matches: clay, hard, grass, and carpet. The use of carpet courts in the Associate of Tennis Professionals (ATP) ended in 2009, however, to reduce injuries.

9. The fastest men’s tennis serve is held by Samuel Groth. 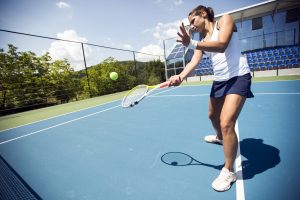 In the 2018 Hungarian Ladies Open, Georgina Garcia Pérez was recorded serving the ball at 136.7 miles per hour. Venus Williams is in third place with a serve of 129 miles per hour at the 2007 U.S. Open.

At Gorin Tennis Academy in Granite Bay, we love everything about the game of tennis, and we want to impart that joy to your children. Whether your child is interested in trying tennis for the first time, or you are looking for a tennis academy to help propel them to the next level, we are here to help. Call today for a tour of our campus, or to learn about our tennis camps.